It Does Not Take Large Snow For Ice Dams To Develop

Posted by admin on Monday, February 22nd, 2016 in Ice News, Uncategorized
no Comment. 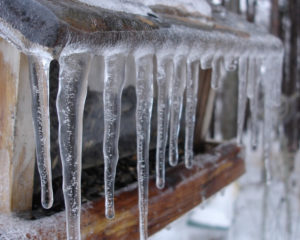 when temperatures dip below 32 degrees. Cold air mixes with the heat generated by the building and solar radiation.  Snow melt water travels down the roof, and refreezes at the roof edge.  If your home is at an elevation where below freezing temperatures and ambient heat source or lost heat is common, the vicious freeze and thaw cycles can repeat themselves over and over again until large ice dams develop rapidly.

The NRCA (National Roofing Contractors Association) recommends that homeowners implement some form of ice dam protection if they live in areas where the average temperature in January is 30F or lower – i.e. the northern half regions of the United States are. all vulnerable to ice dam formation if the conditions are right.

As a rule of thumb, the higher the altitude, the lower the temperatures could become. For every 1,000 feet you climb, the temperature drops 3.5F. This means that you’re at much greater risk for ice dam formation if you live in higher elevation regions.

Areas that are close to the equator are the only exception. Although temperatures are still cooler in these regions, winter temperatures typically do not drop below freezing.

With temperatures that can fall below freezing and any level of snowfall, you have the chance for ice dams to develop.

And if there are other contributing factors involved, the problem is amplified, such as: