Avoid the Danger of Ice Dams in Idaho with HotEdge

Due to high elevation and colder temperatures, winters in Idaho can be challenging for residents. Not only do you have to brace yourself for heavy snowfall, but also for arising issues such as ice dams.

As one of the most common yet problematic winter issues, ice dams hold a notorious reputation among Idaho residents. With their reputation of causing excessive damage to roofs, these pesky formations are not welcome by any home.

With our UL certified and BBB accredited ice melt panels, HotEdge ensures that our energy-efficient solutions can resolve this difficult problem for you with ease. Built to fit a variety of new and existing roofs perfectly, our state of the art solutions are ideal for ice dam prevention in Idaho. 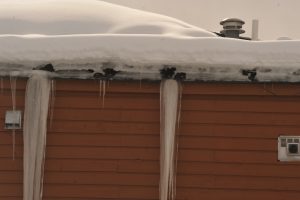 Get your free quote today

Ice Dams: The Pesky Problem That Most Idaho Residents Face in Winter

For many residents in Idaho, the emergence of ice dams is a normal occurrence in winters. With colder temperatures, many roofs form so-called “cold spots” at the edge that cause melted snow water to freeze again. Once it’s frozen, this snow water turns into rock-solid ice dams.

With excessive weight, the ice dams can cause your roof to sink. But that’s not all. They also bring a lot of other issues to the table. With melted snow water standing still on the roof, your home becomes susceptible to various issues. These problems may include roof leaks, water damage, and insulation damage.

Since ice dams are harder than snow, removing them is no mean feat. That’s why it is important to invest in ice dam prevention in Idaho.

How Can HotEdge Help?

With our specially crafted ice melt panels, HotEdge can help you prevent issues that ice dams bring to the table. With our focus on innovation and technology, our ice melt solutions are built with ease of access in mind. They can easily fit your new or existing roof installation without requiring additional construction.

With the ability to fit wood, tile, metal and flat roofing, our solutions stand apart in terms of delivering ideal ice dam prevention in Idaho. That is why, many homeowners trust our products whenever they are winter-proofing their roofs.

To understand how our ice dam prevention solutions can help, contact us for a free quote today. We will be glad to understand your requirements and recommend systems that fit your needs perfectly.